Few lures enter the market with as much frenzy as the umbrella rig did a number of years ago. Despite not knowing exactly its origins, the umbrella rig has been used as a favorite for bass anglers everywhere. Increasing your presentation from one baitfish to a small school should always increase your chances on a strike, and sure enough an umbrella rig has proven to do just that. But is using an umbrella rig somewhat of an unethical means to fish for bass, or any species? Would you consider it cheating? 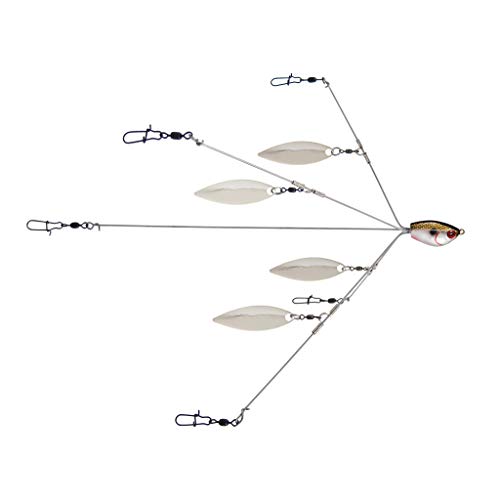 As mentioned before, it’s not known exactly where and who invented the first umbrella rig, but from what I can find, it appears to have been an idea conjured up by a NY striped bass angler. Paul Elias from the FLW bass tour made it famous in 2012 when he soundly beat his competition in the last FLW tour event in Alabama. He nearly broke the record for most weight in a tournament, and was ahead of his nearest competitor by 17 pounds. Andy Poss is credited as the inventor of the “Alabama Rig,” which is a slight variation of the umbrella rig. Regardless of who actually invented the bait, its results speak for itself- it’s a great lure to use when targeting bass.

How to fish an umbrella rig

There are a few different ways you can fish an umbrella rig. While I can’t say definitively, I wouldn’t suggest you try to jig this set up. If you have had success jigging an umbrella rig, I’d love to hear about it on Twitter! But, typically there are two methods to using umbrella rigs- trolling and casting/retrieving.

Paul Elias won a tournament in 2012 casting an “Alabama Rig,” which is essentially the same as an umbrella rig. So it’s definitely successful. The key factor however is weight of the rig and the lures attached. You really should save your umbrella rig for your heavier rods, better gear ratio reels, and stronger line.

A standard umbrella rig with five plastic baits attached can run as much as three or four ounces, so run it on a rod that is heavy. For trolling, you want to make sure you drop the bait into the water while the boat is moving. You want to avoid any tangling of baits (you really shouldn’t tangle if it’s set up properly) so dropping it in the water while on the move will help. Because it’s a heavier bait, you can get some depth just from the rig on its own, but you can also run it on lead core line or with a downrigger.

Make sure you spread the wires out to give each lure enough space from the others. You don’t, however, want to spread them too far.

So is it cheating?

If I had to give a yes or no answer, I would say ethically using an umbrella rig is not cheating. It’s another form of presenting bait to fish. Yes, having five different baits resemble a school of bait is extremely enticing and a little unconventional, but you still have to find the fish and assume the bait you present is something they’re interested in attacking. To me, that’s not cheating. That’s just being more clever than your fellow anglers! But, more and more tournaments are banning the bait, and at last checked, they are illegal to use in two states (Tennessee and Minnesota). What do you think?

Regardless of your opinions, I don’t think umbrella rigs will be going away anytime soon. For competitive anglers, my guess is the days of using them in competition is numbered. But, for recreational anglers looking for potentially an edge, you should seriously consider trying an umbrella rig. They’re a fun new lure to expand your arsenal with and as long as it’s not illegal in your state, an opportunity for you to hook up two, three, even four fish at once.

As if we needed to make fishing more exciting for anglers, here’s an opportunity to really get your heart racing hooked up to a double or triple. Whoever invented the umbrella rig, I’d like to thank them for giving us all a new way to try to catch those big elusive fish we’ve been chasing all our lives. Just one more thing to help us continue to love the sport we obsess over!

This page was last updated on 2022-07-02. Affiliate links and Product Images are from Amazon PAAPI What Are The Best Fishing Lines for Bass What Is The Best Braided Line For Fishing